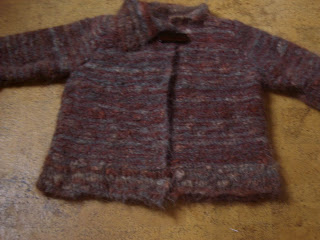 Well, the good thing is that the Jawbreaker cardigan is finished. I went to my LYS to find the perfect button for it. I wanted a very big round one, but instead came home with this oblong shaped one. It was expensive (8€), but I figured I only needed one, and the yarn was 'free' from my stash ...

But then disaster struck. I always, always hand wash my sweaters, and let then spin them in the washer ... I have a new washer, and I must have pushed the wrong button... It has been washed on a short cycle, with 30°c temperature and spun on low agitation, but still : my jawbreaker cardigan shrunk.

I lost 8cms in width, and 4 in lenght. I hasn't felted tough, it is still wearable by the right woman, who sadly is not me any longer. So, I am organizing a cardigan give-away ! Anybody wants a nice short jacket, knitted in a silk/wool/mohair combo ? Finished size = 52 cm width (total circumference = 41inches), total length = 48cm. Closes off-center, asymetrical collar, 3quarter sleeves. I would love to see it go to a good home, and will send it of for free. Just leave a note in the comments. 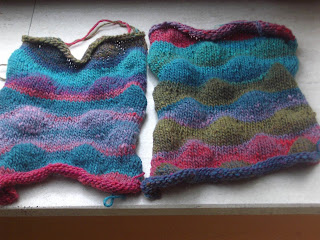 Still working on the lizard ridge afghan. I have several balls of the same colorway, and I was a bit worried that this would yield a monotonous afghan. No need to worry ! This is the same color (kureyon 184), knitted in the same way : alternating knitting from the inside and the outside of the ball . As you can see, these squares look very different. I guess that's what you get with yarns with very long color repeats. And with the yarn that is still on its way, it looks like I will have plenty to finish this afghan.

OK, I am obsessed with knitting this lizard rigde afghan. Forget Jawbreaker, forget Kaffe Fasset quilt. It's not that I can be terribly creative with this afghan. It's just good, simple knitting with very nice yarn. Sometimes that's all I want.

I can finish one square in one evening session of mindless knitting, and still have this great sense of accomplishment. 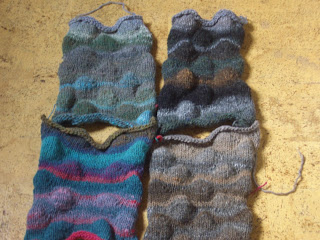 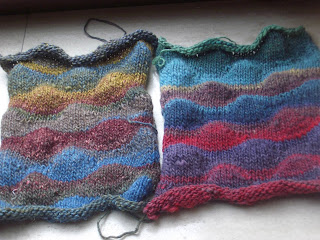 And these are the squares with 2 newly bought skeins : left is Noro Silk Garden 234, right Noro Kureyon 92

I decided to be frugal, and knitted a square with leftovers. 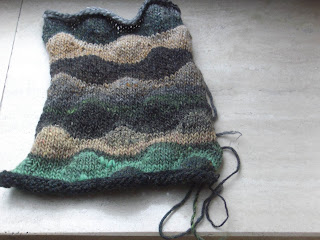 This one is knitted with Noro Kureyon 51, 149 and 92. Especially n°92 is a colorway that has lots of different colors in it - it goes from red-blue-green to yellow and black (the last 3 were knitted in this square). I plan more of these 'frugal' squares.

And I am expecting more yarn in a swap from Kerrie and Lies - thanks in advance !

Posted by dominiqueknitting at Wednesday, February 21, 2007 No comments: 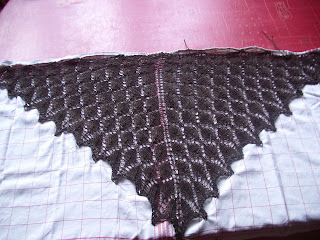 As I have to work this weekend, I don't have much time to knit (there are still house chores to do). I was convinced I had a suitable yarn for the bind-off for this short shawl, and I finally found it. I used a brown sock yarn, doubled (scheepjeswol invicta). It is a slightly different shade of brown, but it works for me.
And I have been thinking about my lizard ridge afghan. Two people mailed me, and I can probably arrange a swap with them. That means another 3 to 4 balls of Kureyon. I passed my LYS and looked what they had, and walked out with these 2 : kureyon 92 (left) and silk garden in 234 (right). 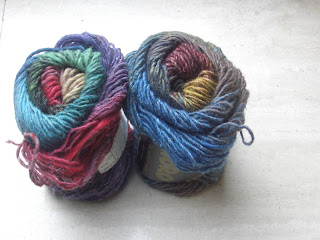 I want this afghan to be cheerfull, without being too loud. So I am looking for muted/washed out colors in Kureyon.
Posted by dominiqueknitting at Saturday, February 17, 2007 1 comment:

Today it's 'dikke truien-dag' at work (put on a sweater-day). It's about concern with global warning, and making people aware that it is OK to turn down the heating. Too bad that I have a day of, so I cannot show a sweater to the collegues today !
Posted by dominiqueknitting at Friday, February 16, 2007 No comments:

I am contemplating knitting the 'Lizard Ridge' afghan in the previous Knitty issue. 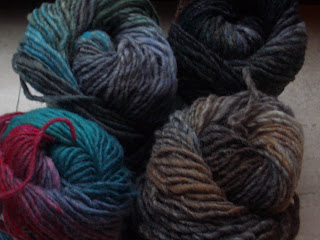 I have a bit of Kureyon leftover from other projects, namely 3 skeins of shade 51 (upper right ), 4 skeins of shade 149 (lower right), and 1 skein of shade 150 (upper left). And I received 2 skeins of shade 184 in the secret pal 9 swap (lower left).
The afghan is made up of 24 squares, all knitted in a different color of Kureyon; or in one shade of this multicolor yarn. When I first saw the afghan, I immediately fell in love with it, but at the same time made a note to myself that it would be way too expensive. But these last 2 balls in the swap really made me swoon all over again. I want to knit Lizard Ridge !
On the other hand, I made this firm resolution to knit from stash during the first 6 months of 2007. I have 9 balls of Noro, so I would really need to buy extra's.
My question : has anybody knit this afghan with several blocks in the same color ? I googled and googled, but it looks like everybody used a lot of different colors. I only found one that used the same color throughout the whole afghan. Do you think it is possible to use what I have, and still come out with an attractive afghan ? I could start it, and buy extra Kureyon in the second part of the year (my birthday is in August).
Or, another possibility, mabye some of you have oddballs of Kureyon lying around, and want to swap with me (for Kureyon in one of the shades that I have, or something else atractive from my stash) ? 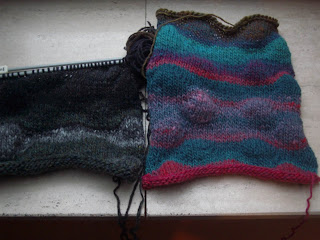 I started a block yesterday. On the right shade 184, on the left shade 51.It looks like one block doesn't take a whole ball. The pattern uses 21 balls for 24 blocks - does this mean you use leftovers from every ball to knit the last squares ?
Thanks for any input.

The jawbreaker cardigan is on hold - I have to assemble the pieces before I can knit the collar. Assembly is reserved for the weekend (but this weekend I have to work).
And the Kaffe Fassett quilt is on hold also. I need help to get me going, but the hobbyclub was canceled due to the weather. My LYS-owner told me about an informal quilt group she is having once a month. I went, and it was very nice. I have finished designing, and need to start sewing. Not something I am looking forward too.
Posted by dominiqueknitting at Wednesday, February 14, 2007 1 comment:

all the way from Canada... 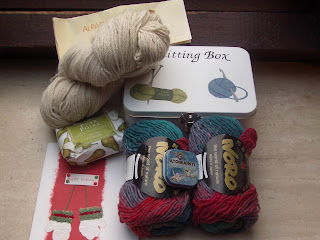 ... came this nice Secret Pal package. I really like the alpaca yarn - it's always interesting to see 'new to me' yarns. And of course, some Kureyon never hurts. Actually, I was considering to knit the 'Lizard ridge' afghan in the previous Knitty. I have 3 colors of Kureyon (leftovers from other projects) in my stash. This one is a nice addition. In the package was also a nice card, a painted box and a tin of mints. The secret pal is Deb, and she suggested using this tin for stitch markers !
Posted by dominiqueknitting at Monday, February 12, 2007 No comments: 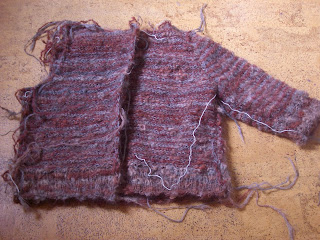 I knitted a 3/4 sleeve after all. Because I am knitting this from stash, and because the Phildar 'Arome' doesn't list yardage, I am afraid that I might run out of yarn. What I did now was sewing it together provisionally, to check how it looks on me. You probably notice that I used the right side of the stockinette on the sleeve, and the reverse stockinette on the body. I don't think I will keep that feature. Other then that, I rather like how it looks now; it's kind of quirky, but in a good way. The overlapping fronts don't really overlap totally. When I wear it, it falls open, probably because of the onebutton-closure. And maybe the fact that I have a lot to cover on the front has something to do with it also. I now need to knit the second sleeve, and then the collar. The pattern in the magazine uses an asymetrical collar. That will enhance the quirkiness of the garment for sure. The new spring fashion is showing in the shops now, and there are a lot of very short cardigans with big round collars and big buttons. Maybe I will be in fashion for once ?
Posted by dominiqueknitting at Saturday, February 10, 2007 No comments: 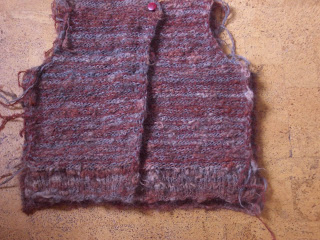 Maybe you have noticed on my blog that I don't knit that many sweaters. I love to knit smaller projects, and my main obsession is knitting with color (Kaffe Fassett really started me knitting).
When I knit a sweater, I make adjustments that I 'think' will work for me. That's why a simple project sometimes can take a long time, because I rework them. I am not tall, but very round (wel endowed ? ample ? ).
I am rather pleased with the jawbreaker cardigan adjustments I have made. Originally the cardigan has slanted (cutaway?) fronts, that close in the middle with one big button. I was worried that those fronts might accentuate the tummy. I made the fronts bigger, knitted one slanted and one straight, so that they overlap. Now the cardigan will close off-center. I still need to find the perfect button for it. I just placed a button there to show you how it will close. I have to make a decision about the sleeves now. In the pattern they are 3/4 sleeves. I think I want long bell sleeves. What do you think ? I am also worried this cardigan will be a tad short. I am not sure what I will wear with it. I like to wear long tunic-lenght t-shirts, sometimes with an A-line top over it. Maybe I'll have to buy new clothes to go with this sweater ! 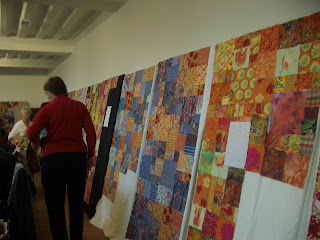 I just returned from the Kaffe Fassett workshop today. I decided to use the tulips, and before lunch I was very pleased with the lay-out. 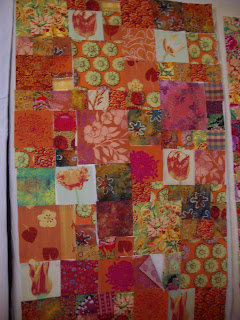 After lunch I wasn't so sure any more. 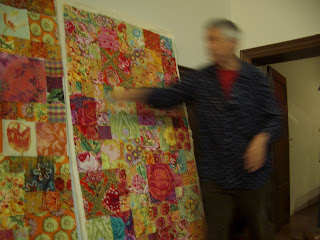 The workshops ends with KF commenting on everybody's work. He said he would not use the tulips, because they stand out too much. He suggested taking a textile dye pen, and reworking the background of the tulips a bit (polka dots, litlle flecks of color ...). On the other hand, several other ladies in the workshop did like the tulips... I am confused, visually and otherwise exhausted right now. Sorry the picture with Kaffe Fassett in front of the quilts is a bit shaky. Somehow picture taking was just a bit too much today.
I don't feel like finishing this piece at all at the moment. I am a bit discouraged. Probably just fatigue, and maybe a good night sleep will help. Most likely I am not a patchworker at heart. I love playing with the colors, but all the cutting and sewing scares me.
Before I forget : the exhibition in the Modemuseum in Hasselt is very nice. Check it out !
Posted by dominiqueknitting at Friday, February 02, 2007 4 comments: